A special characteristic of a music blogger is meeting a large number of people over internet. That’s how I have met Rafael Grafals, owner of Heart And Soul music blog. When you are following Orchid Tapes scene, you are probably familiar with his blog. He belongs to that type of people you will never forget you have met. I really admire his great taste in music and after this interview I have realized I also share with him a lot of thoughts and ideas.

What was the impulse to start a (tumblr) music blog?

I had just started digging through bandcamp and found a lot of really cool music that no one I knew was really talking about. I would send my friends links to stuff all the time and decided to just turn it into something I did. I also started reading blogs like We Listen For You and Flashlight Tag that really inspired me to start blogging.

Recently you have reached 1000 followers. How long did it take?

Yikes. It took too long for sure. I’ve been doing this for years now but I feel like just last year I figured out what I’m doing and how to blog (fairly) consistently.

How did come up with the name Heart And Soul?

I honestly can’t even remember. I just remember not being happy with the previous name (Brighter Sounds) and wanting to change it up. Sometimes people ask me if it’s a Joy Division reference and I just say yes.

Do you remember the first band/song you have posted on your blog?

Yeah! It was Grandpa Was a Lion. Can’t remember the specific song but I remember specifically that it was GWAL because he was a huge reason why I started music blogging. He also emailed me the other day saying he’s working on music again which I am really excited about.

Have your music taste changed since you started your blog?

Definitely. Exposure to a lot of weird stuff on bandcamp has led to me learning about a lot of music just because I’d hear a band and find out the who/what inspired them. I’ve learned a solid amount of music history because of it too. Also writing led to me being exposed to a lot of cool electronic music which I didn’t really have much of a background with when I first started.

Do you have any criteria that a song or an album should have to be posted on your site?

I guess I just try not to write about bands that are already really well known. I don’t have a specific line that I draw but no one needs to hear me talk about Arcade Fire or something. In terms of style, I guess I’ve been writing more about pop music lately but I still write about ambient / drone stuff too.

What is your three most favorite genres and why?

Pop music, in a very broad sense of the word, is really inspiring to me. I just think there’s a lot that goes into writing a melody that sticks really well, or a hook that gets stuck in your head. Ambient music has always been about escapism for me, sort of creating spaces where I feel safe so I love it a lot. I feel like there’s a lot you can do in ambient music like dealing with catharsis and portraying emotions in a purely sonic way that I really like. I guess hip hop would be the third. It just feels like a genre that keeps getting weirder and weirder and is really open to change.

Have you ever thought about making living out of your blog or music?

I used to think I wanted to make a living off of music writing but the more I think about it the less appealing it seems to me. I don’t know, I guess there’s a fear if becoming really jaded or hating writing once it becomes my job.

Have you ever thought about stopping doing your music blog?

Funny that you should ask because I’ve been thinking a lot about ending the blog after this year is over. I still love writing but I feel like the blog has sort of run its course at this point. I’ve been doing this for a long time now and I’ve loved it but I might be ready to move on. I’m giving myself the rest of the year to think about it, though. I could easily end up changing my mind.

What was the first record you have ever bought?

First CD I ever purchased was the Paul McCartney Back in the US Tour live album. I actually haven’t listened to it in a while but I used to play it every night before I went to bed on my parents’ boombox.

Which type of physical media do you prefer and why?

Vinyl is still my favorite form of physical media. My sound equipment honestly isn’t even great enough for me to notice a huge difference between vinyl and high quality digital music but I love having album artwork in a larger, physical form and I think there’s a lot of great stuff you can do with vinyl packaging.

You are also hosting shows. Do you find it difficult?

I only recently started doing that so I don’t have much experience but the two shows I’ve booked so far have been pretty easy to set up. That’s also because the spaces I booked them at have been really easy to work with and very cooperative.

What was your favorite show you ever hosted?

Honestly haven’t hosted enough to have a stand out favorite yet. The two shows I’ve set up so far (Secret Mountain / Pebbles / Free Cake For Every Creature / Florist and Margo / Steve Sobs / Noble Oak) have both been really special for me.

Do you prefer music venues or special places, house shows?

I honestly have no taste in venues besides absolutely loving the Silent Barn here in Brooklyn. It’s the only space I’ve made any real emotional attachment with and that’s just because everyone I’ve encountered there has been fantastic.

Recently you had your first gig. How did it turn out?

It was great! I played with Red Alder and it was such an honor because I’ve been listening to her music since before I even started recording my own. I had a really great time and felt like my set went really well. It made me really excited to play more shows and work on more music in the future. 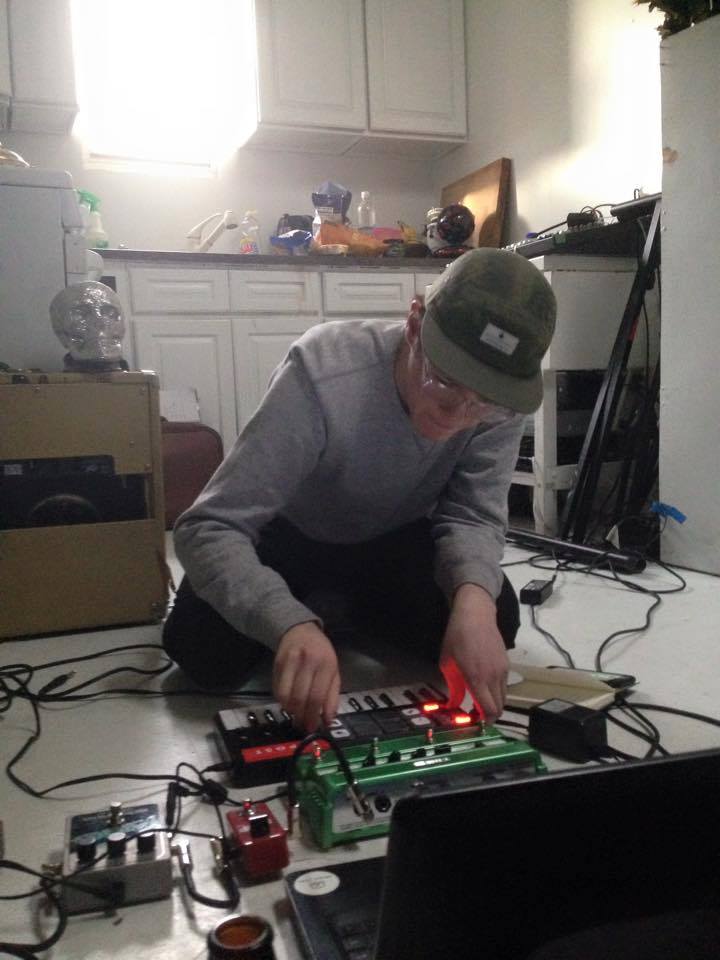 Rafael at his first gig

Have you always wanted to write own music and start to play shows?

Yeah I’ve been involved with music since around the 5th grade so I’ve always loved the idea of writing my own music and performing it so it’s been something I wanted to do for a really long time.

How did you decide how your music project should sound like?

I feel like the sound itself happened naturally. I just started trying to make music that was a direct extension of what I was feeling and what I needed to make for myself. Like I mentioned before, ambient music for me has always been about escapism so that’s sort of what I went into this project with in mind, a way of sort of getting away from all the negativity I’ve encountered in my life, creating a safe space for myself because often I don’t feel very safe.

What are your plans with the blog and your music project?

The blog can really go anywhere at this point as I’m not really sure what I’m gonna end up doing with it. As far as my music project goes, I just wanna play a lot of shows and get back to recording soon, maybe release a tape before the end of the year.

Have you ever wanted to start a label?

It was a dream of mine to run a label for a while but now I’m not too sure. It’s definitely a huge investment and I’m not sure if it’s something I could take on given the things I’m working on at the moment. It would be really great to start one some day though.

How did you meet all people in music scene Orchid Tapes, Teen Suicide, FMLY, etc.?

Pretty much through the internet. Most of the time it’s that I make some sort of connection with them online and then we meet in person at a show or something. I feel like this still happens even with local musicians.

Do you find it hard to manage school with your interests?

I actually don’t go to school. I’m working five days a week though which often sucks the inspiration out of me and makes it hard for me to want to be creative or do writing.

Do you have any specific dream regarding music?

That’s hard to say. I don’t have any long-term goals at the moment that are related to music. The one thing I feel I really want to accomplish is making music that heals people in the same way a lot of my favorite records have helped me through a lot. I’d love to be able to give back in that aspect and help someone through art.

What are your three recent best discoveries?

Big Hush, Ruhe, and sister palace. I found all three of them on bandcamp digs in the past few months and I love all of their work so much. Big Hush and sister palace are more pop leaning type bands that are just really good at songwriting and Ruhe is an ambient artist whose album Chamber Loops has been really inspirational to me lately.

Name one advice you would give other music bloggers based on your experience.

I guess the main piece of advice I’d give is never feel like you have to generate writing on a super strict schedule or else you might feel pressured to write about things you might not even care about that much.

And last two questions. Why did you dyed your hair blonde and why did you changed your middle name to Bandcamp?

Haha well the bleach blonde thing was just a result of me having wanted to do that for a while and finally being pushed to do it after a few of my friends tried it. The Bandcamp thing was based off of a joke someone made about me and my friends where they took a picture of us and said, “wow look they came dressed as bandcamp.” A lot of my friends still don’t let me forget about that so I played along with it and made it my middle name on Facebook (but then they made me get rid of it).