I have met Andi Dvořák at Creepy Teepee festival in Kutná Hora, Czech Republic. He was there with bands from his Austrian label Fettkakao based in Vienna. We have not talked a lot, but later I have approached him over internet and we chatted few times. Then I have met him again at another Creepy Teepee and we talked a little bit more. From time to time he sends me news from his label and I am always happy to check it out. Last week I have approached him with few questions about his label and music life as well.

When and why did you start the label Fettkakao?

I started Fettkakao in the summer of 2005. In my understanding, everyone was participating and communicating within the punk community, which I was part of since my early teenage years. I was writing a fanzine, playing in bands and setting up shows w/ friends, so starting a label at age of 25 was doing another one of those things.

What is the story behind the name?

Krawalla from Räuberhöhle (Berlin) was visiting us in Vienna. During her stay at our shared flat, my friend Lisa Max asked Krawalla if she’d already had a fettkakao, she was referring to the way I made Hot Chocolate. From that day on, I was called Fettkakao by Krawalla.

Do you remember your first release?

Of course! It was the the Vortex Rex – Short Attention Span 7″. For me, it was the punkest record/act in our area, but I knew no one around us would put that out. It wasn’t indie enough for the established labels, and it didn’t fit the punk formula of the HC labels.

Which type of physical media do you prefer?

I love vinyl. I was socialized with that medium. Nevertheless, my main focus lies on the artists and the documentation and manifestation of their work.

It is hard to run a label in Austria?

I guess as hard as it is everywhere else. We have an okay funding system here, but shipping prices are very high, and since I don’t intend to release sellable items in the first place, it is always a question if I will recoup the costs.

Have you ever thought about moving to some other country?

Yes, but not because of the label. Also, I really like living in Vienna.

How do you approach bands to be part of your label?

I release music by friends of mine, people I admire and feel connected to, like their art, performance, message and music, I guess.

Do you have a lot of music submissions?

Not that many, people still send me emails though.

What should a band have in order to be released by you?

Something to say? But really, I constantly figure out myself what it is. As said before, my friends make great art and I am still making new friends.

How big is alternative indie scene in Austria, particularly in Vienna? Are you part of some community?

What’s really changed in the last 10 or so years in Vienna is that you always have something interesting happening here. People became active. You’d go out and discover something new: shows, art exhibitions, queer feminist performance festivals – all very punk, very thoughtful. Also labels like Totally Wired or Bachelor – they really keep things moving. 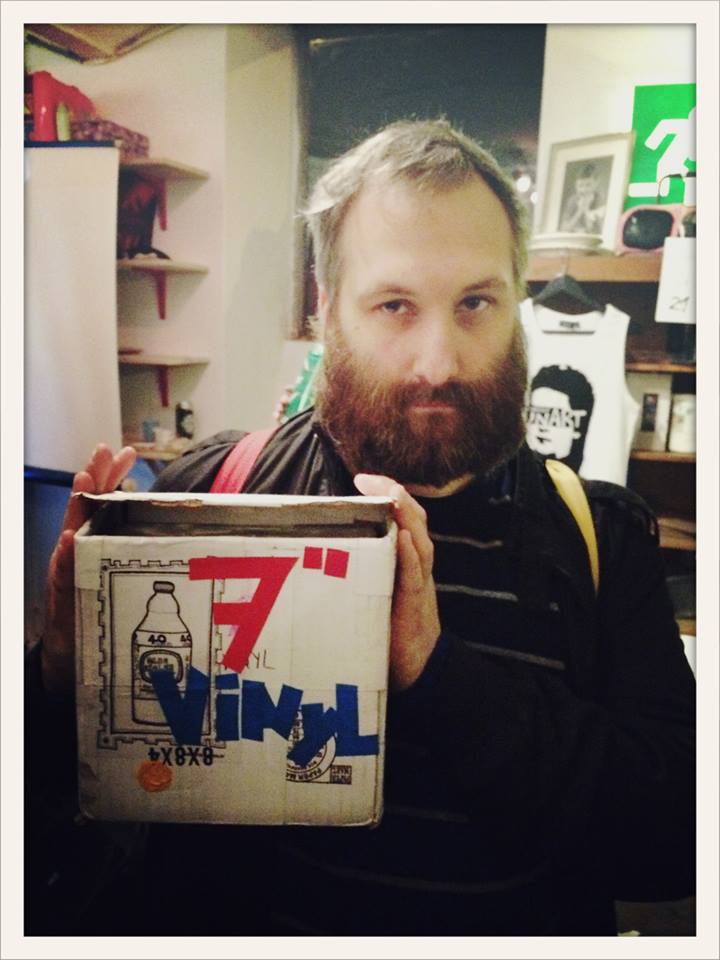 Andi and his DJ box

Do you find music reviews important?

Do you get a lot of attention in other countries?

Yes. From people like you, luckily. But the thing is that I work locally, because things happen around me. Since my involvement with punk rock, on the other hand, it was communicating around the globe. First letters, fanzines and tape trades, later e-mails and what not.
I still set up shows for touring bands I am a fan of, and also like to tour. I never thought of Fettkakao as an Austrian label, I just happen to live here.

What do you consider as the biggest success with your label?

Being surrounded by a good community, where people are inspired by each other. This is not my success, but I can see how one or more labels could help.

I know you are also working with Mile Me Deaf. Do you enjoy it? How did you met them?

I released a 7″ and an LP and you’ll find MMD tracks on both compilations. Wolfgang was in a band called Killed By 9 Volt Batteries and joined Sex Jams, who released their first single on Fettkakao. Even though it was around much longer, MMD was Wolfgangs little known solo project. By late 2010, I was setting up an MMD show and thought about releasing a 7″. It turned into a band later and they have released 3 records on Siluh, their current label.

What is the toughest part of running a music label and being a manager?

You work with human beings which is wonderful, but it can be challenging sometimes.

Are you able to make a living off of music?

No, I don’t live off it and I never intended to.

You are also part of a band called Lime Crush formed from Fettkakao family. Why did you start that one?

I haven’t had a band in over 10 years, although I helped out and played (mostly bass) in bands I was working with from time to time. But I wanted to be in a punk band again, performing, being part of the writing process, and traveling around. So I asked Panini, Veronika and Nicoletta and they all said yes!

We released a 7″ in January, toured a little bit and now have recorded a song for the upcoming Totally Wired compilation. We are doing some shows with Alte Sau from Hamburg in May and then play some shows in Hungary in July. We are working on some more shows in June at the moment as well.

Playing with my friends and being able to tour.

What did you listen to when you were a child?

I liked some radio songs, but did not give it much attention. I was more impressed by Ghostbusters and cartoons than by music.

Do you remember the first physical record you ever bought?

It must have been a Credit To The Nation or Therapy? LP. I first listened to stuff my sister had. She introduced me to Rock music.

Name three new bands that are worth checking out.

Kristy and the Kraks, Trash Kit, and Dubais.