cassette spence’s music is described by Adafruit as a “fog thick with atmosphere and emotion”. her habitual bedroom recordings started in her early teens in south texas and continue today in her new york apartment. she’s toured north america as an instrumentalist in bands Pepper Rabbit and Verb the Adjective Noun, and has released two albums with her best friends as Vassals. she’s left handed.

A beautiful bedroom pop in the style of Cigarettes After Sex with a softer touch. So good, so peaceful. 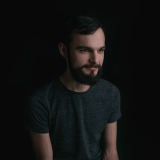