We are honoured to share the new single ‘your grave next to mine parts 1 & 2’ from the enigmatic experimental ambient folk musician, Salt and Lye. The song is a dark heavy maze of unearthly echoing vocals overlaid by faint guitars. If I could describe it meticulously, it’s like a run in the woods with no exact destination in mind or this indescribable build up coming out of your chest but it never fully reaches its point. This is the kind of music an audience will have to cast around for.

My curiosity took over me when I was digging information about this music project so I reached out to the artist whose real name goes by ‘Anthony’ and asked them to tell us something about themselves, or even the most random thing they could think of. Luckily, Anthony replied to us and said:

I’m currently working on a collection of songs that will, hopefully, fit together in a sort of concept album. I’ve been moving around a lot recently and have had to use a pretty bare-bones setup for recording, but I do the best I can with what little that I have. This project started as something I did for my friends, it was a way I could communicate with them. I found I could tell people the most honest things if I played a few chords while I said them. it made me feel less alone.

You can find more music on Soundcloud. 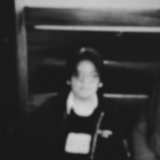 I try to write sometimes